Just shy of a year ago, I finally thought we’d be making a big change to our living situation, a change which would allow us to finally live as we wanted. Instead, I had a severe panic attack, [insert montage here], and it wasn’t until a month and a half ago that the conditions were right for that change. Sixteen* viewed houses later, we’ve found our new home, and, as of October 16th,** we will be living in that home.

It’s going to be such a huge change, and I can’t even explain how excited I am for it. The last time something this momentous occurred was when I received a letter informing me that I had won the scholarship that would allow me to quit my job and go to grad school. In hindsight though, the thing that really started me down the path to grad school was the purchase of a book, Anne Carson’s If Not, Winter, her translations of the Sappho fragments, at some point as an undergrad. Just like the aforementioned panic attack, that book literally changed my life.

In the previous year’s prep for the new place, I imposed a moratorium on myself to not buy any new clothing, and, for the most part, I’ve stuck to this. However, I absolutely couldn’t help myself when kOs fave Zam Barrett DM’d me a photo of this piece, before releasing the first wave of his newest womenswear collection for F/W 19. The inspiration for the collection was Sappho and her poetry, with pieces named after her fragments (e.g., Ode to Aphrodite dress), the people in her life (e.g., Kerkylos wide-legged pant, Clais shirt and coverall), her instruments (e.g., Lyre blouse), and herself. The photo Zam had sent me was of the black sleeved version of the Sappho dress, featuring a print of a translation of Sappho’s fragment 16*** on the pocket (sleeveless version in silk twill pictured below). Was it a sign? Probably not, but I will be taking advantage of the opportunity to signify this next era in my life with what had once before done just that. 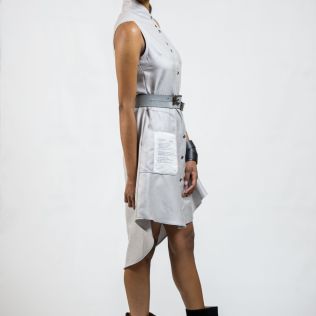 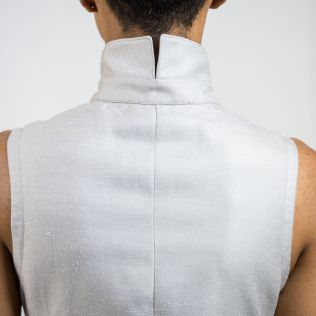 Fragment 16, btw, is one of the longest intact fragments we have of Sappho’s poetry, and is one of the first I had translated of her work. My Greek translations have always been rather stilted, so it’s probably for the best that that piece of paper is hidden somewhere in one of the various unmarked moving boxes currently filling up every available area of floor in our apartment. So instead, below I reproduce the beginning of Anne Carson’s translation.

← Sown in fields of stars
Beyond the eyes / A hidden life →

One thought on “Tears of yesterday / Recreated today”